Story Behind the Story #49: Crispin at the Edge of the World 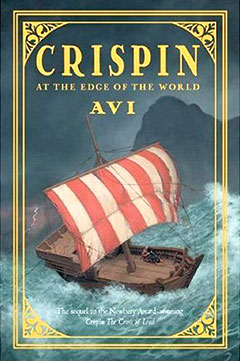 One of the plea­sures (for me) in writ­ing his­tor­i­cal fic­tion is trav­el­ing to the places where the events I am writ­ing about (and invent­ing) take place. So when I was work­ing on Crispin at the Edge of the World, my wife and I trav­eled to France.

Some­body had to do it.

We flew to Bor­deaux, rent­ed a car and just drove south into the Dor­dogne, the old Aquitaine region. We went by way of my usu­al care­ful design, which is to say with­out any plan at all. We also had no idea that the tra­di­tion­al tourist sea­son was a week off. Lucky us. That meant that places were just open­ing, and we’d be greet­ed by such as, “We’re not quite ready for vis­i­tors, but if you don’t mind stay­ing in the cas­tle tur­ret, we can put you up.”

My high-school French final­ly had a workout.

Over­all we were won­der­ful­ly well reward­ed, with vis­its to ancient medieval towns, and walled cities like Berg­er­ac. I saw and expe­ri­enced places that exist­ed at the time of my book. 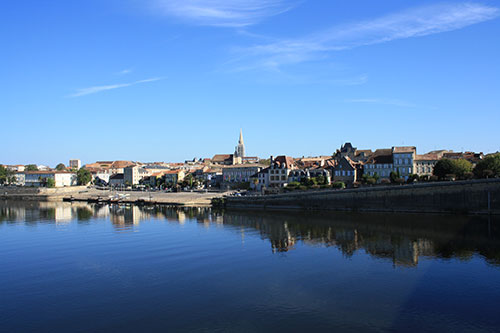 I’m not sure where I was in my first draft of the book when we reached La Force. This was (and is) a tiny medieval town, which is, in fact, com­plete­ly round, because a moat had been built around it. At one point on this cir­cle, just out­side the town, was an old church. All of it was quite enchant­i­ng, includ­ing stay­ing in that cas­tle tur­ret. La Force became the scene of the cli­mac­tic strug­gle in Crispin at the Edge of the World, where Bear was mor­tal­ly wounded.

I need hard­ly say this was in no way part of my plan for the book. But to engage the sens­es in real places for a tale of imag­i­na­tion is an enor­mous asset. How does it all look, smell, and sound? And oh, yes, the food was­n’t bad. Not at all.

Just this sum­mer I went to Mary­land, to vis­it a site which is impor­tant in the book I am cur­rent­ly writing—an ancient cypress swamp.

My first swamp. Some­body has to do it. Who bet­ter than the writer?

The main point is, going on such a trip changes what I am writ­ing, gives it a kind of life it nev­er would have had before. It’s not an acci­dent that folks have said that Crispin at the Edge of the World is a bet­ter book than Crispin, the Cross of Lead.

I agree, but then, I was there.

1 thought on “Story Behind the Story #49: Crispin at the Edge of the World”