Story Behind the Story #21:
The Man Who Was Poe

Some­times book A leads to book B. Such was the case for The Man Who Was Poe.

My last post, about Some­thing Upstairs, men­tions how I moved to Prov­i­dence, Rhode Island, and how, once there, I began to read about local history.

While doing that, I learned that Edgar Allan Poe had impor­tant con­nec­tions to the city: he was try­ing to get mar­ried. Indeed, there is a pho­to­graph of him—often replicated—that was tak­en in Prov­i­dence. The moment is part of the book.

When I first wrote Some­thing Upstairs, which deals with time trav­el, I had my hero trav­el back to dif­fer­ent moments of Prov­i­dence his­to­ry. At one such moment, he meets Poe. That mul­ti-time plot struc­ture how­ev­er, did not work well, and I dis­card­ed the mul­ti­ple times, and kept the sto­ry in one time zone.

Nev­er­the­less, I had, so to speak, met Poe. More­over, he was (is) fascinating.

There­fore, when Some­thing Upstairs was com­plet­ed, I turned to Poe. It was enor­mous­ly help­ful that many of the places that Poe vis­it­ed when he was in Prov­i­dence still stood. I could not just vis­it them, but walk the sto­ry almost in its entire­ty. You can, of course, still do that.

Odd fact #1. Part of the sto­ry involves a cod­ed let­ter. Poe, who had been an edi­tor, used print­er’s marks for the code that appears in his book, The Gold Bug. I used the same code for an impor­tant moment in my book. When the print­er of The Man Who is Poe saw that code, he thought it was gob­bledy-gook, and stripped it from the book. I dis­cov­ered this when look­ing at the first print­ing of the book. I called my edi­tor (Richard Jack­son) Stop press!

A new page had to be print­ed, and the entire first print­ing was recalled and had a new tipped in page with the cor­rect code. 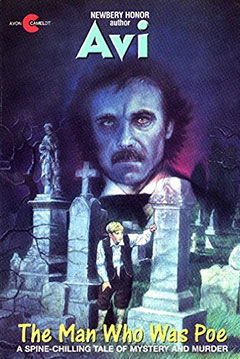 Odd Fact #2. By the time this project first was put togeth­er, I had become friends with the artist, David Macaulay, the illus­tra­tor and writer. A Prov­i­dence res­i­dent, he was teach­ing illus­tra­tion at the Rhode Island School of Design. I asked him if he would do illus­tra­tions for The Man Who Was Poe.

Ini­tial­ly he agreed, but sub­se­quent­ly changed his mind. It is fun to think how the book would have looked if he had done the illustrations.