Story Behind the Story #40: Don’t You Know There’s a War On? 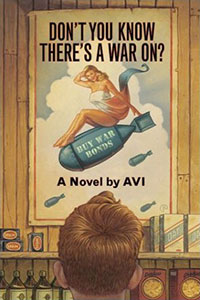 One day my youngest son Jack—I think he was in fifth grade—came home from school: “We’re study­ing World War Two,” he announced, not very hap­pi­ly. “And I have to find some­one who was alive back then and inter­view them. How am I ever going to find anyone?”

“I was around then.”

“You were? You’re that old?” These words were expressed with a mix of dis­be­lief and awe and maybe shock.

Jack inter­viewed me, and as we talked I real­ized (to my sur­prise) that although at the time I was very young (four years old when the USA entered the war) I remem­bered quite a lot: My father in uni­form, black-outs, lis­ten­ing to the radio for war news, food rationing, scrap met­al dri­ves.… and a lot more. I thought: I could write about this. And indeed, that’s how Don’t You Know There’s A War On? began. The title comes from a phrase very com­mon in the time, a kind of uni­ver­sal answer to any­thing that happened.

Mem­o­ries notwith­stand­ing, I did have to do a lot of research, and was (on my part) in awe how tru­ly this was a world war, and how the Unit­ed States, for the most part (Pearl Har­bor except­ed) was untouched, but deeply engaged. Hence my memories.

I remem­ber, too, “V‑J, Day,” when the sur­ren­der of Japan was announced, the war over, and the spon­ta­neous parade in which I was a tiny part. 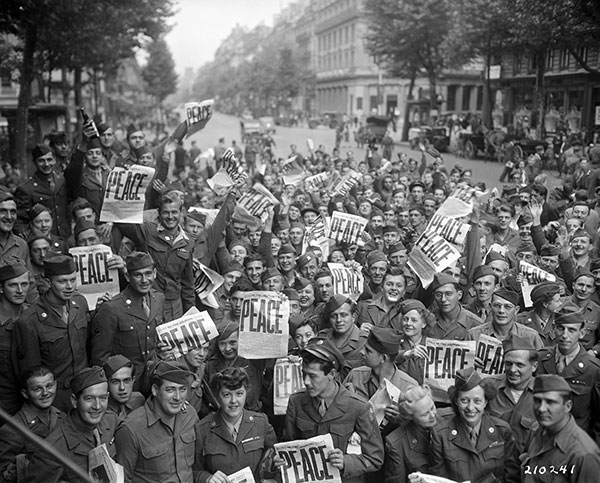 When I do read­ings of my books—which is some­thing I very much enjoy—I always read an excerpt from this book. As a read-aloud, it’s very effective.

The book, how­ev­er real its sur­round, is a work of fic­tion. But it is mem­o­rable to me because it is a love sto­ry, though the word “love” is nev­er used. For it is about how Howie Crispers, my young pro­tag­o­nist, tru­ly falls in love with Miss Gris­som, his teacher.

Now the point is, “Miss Rolan­da Gris­som,” is one-hun­dred per­cent a fic­tion­al inven­tion. Yet, even as my main char­ac­ter fell in love with her, I, the author, did too.

Who was she? Was she in any way based on any­one I knew at any age? I have racked my brain to fig­ure that out. I nev­er did. I had invent­ed her, but it did­n’t keep me from falling in love with her. A bit like the ancient myth of Pygmalion.

But unlike the myth, I nev­er learned what hap­pened to her.

Maybe some­one can tell me.