Story Behind the Story #60: City of Orphans 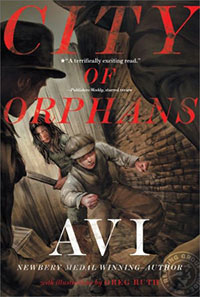 Like mil­lions of Amer­i­cans, my fore­bears came from Europe, land­ed on Ellis Island, and went on to New York City, where they stayed. One of the places they stayed was New York City’s Low­er East Side. This was a time when the city had some thir­ty dai­ly news­pa­pers that were not writ­ten in the Eng­lish lan­guage. Amaz­ing­ly enough, much of the ten­e­ment archi­tec­ture, has remained in place. There is even an exist­ing, won­der­ful Ten­e­ment Muse­um, where I saw and learned a great deal, and which helped me write my nov­el, City of Orphans, a nov­el about immi­grant life in New York, at the end of the 19th Century.

Even I, when I com­plet­ed uni­ver­si­ty (1960’s), came to live in the area. I could not locate the actu­al building—one was so much like anoth­er. But it was a five floor walk-up, a tiny three-room apart­ment. In the small kitchen was a bath tub. By plac­ing a wood­en board over it I had my kitchen table. Then my old col­lege room-mate arrived. Ten­e­ment life. Rent: Thir­ty-two dol­lars a month.

By all accounts—and there are many accounts and memoirs—at the end of the 19th Cen­tu­ry, it was an intense­ly crowd­ed area, full of life, to be sure, but also full of filth, fires, and dis­ease. Pover­ty was extreme and rampant. 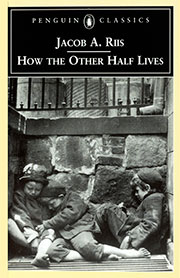 If you want to see what it was like, find a copy of How the Oth­er Half Lives by Jacob Riis, a high­ly influ­en­tial pho­to­jour­nal­is­tic account of the city at the time—one of the first books of the kind. Be advised; it is also full of racial big­otry, anoth­er sta­ple of the day. The pho­tographs are stunning.

When I was doing research for the book, what caught my atten­tion was the con­stant ref­er­ences to chil­dren, count­less num­bers of them who lived on the city streets. To begin, there was no room for them in the tiny ten­e­ments. More­over, these young kids were often aban­doned. Most inter­est­ing to me, these kids, being the chil­dren of immi­grants, quick­ly became assim­i­lat­ed (for bet­ter and for worse) into Amer­i­can ways, dis­tanc­ing them from the ways and cul­ture of their par­ents. Indeed, they are referred to as “orphans with par­ents.” Hence the title of the book, City of Orphans.

The Geless fam­i­ly, the Dan­ish immi­grant fam­i­ly at the cen­ter of the book, strug­gle to keep togeth­er, midst all the hard­ship, to be lov­ing and car­ing to one anoth­er. And even—not at all uncom­mon in the day—taking in an aban­doned child because that’s what one did.

When I read about those times I was struck by the vibran­cy of life, just as I was moved by how dif­fi­cult life—assuming one lived—was. What I tried to cap­ture was the enor­mous ener­gy of that day, and the surg­ing emo­tions that must have also been part of each day.

Some books, you enjoy writ­ing. This book I loved.

3 thoughts on “Story Behind the Story #60: City of Orphans”