Story Behind the Story #59:
Crispin: The End of Time 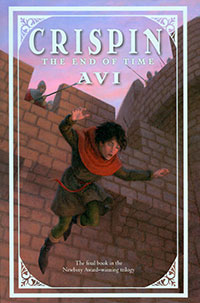 It was one of those rare moments in my writ­ing life: When I con­cep­tu­al­ized writ­ing the Crispin books, I envi­sioned a series of four books, each with a cer­tain sto­ry. The fourth book was very much in my head. It would take place in Ice­land, and beyond. Curi­ous­ly, I even knew the last line of the final book.

First how­ev­er, there was the third book to write, Crispin: The End of Time.

Some things had changed. The orig­i­nal edi­tor of the first two books moved from one pub­lish­er to anoth­er. But there was, at first, still a com­mit­ment from the edi­tor to pub­lish the next two Crispin books.

This third book was writ­ten, and in the first draft, Crispin reached Iceland.

Indeed, I went to Ice­land, want­i­ng to expe­ri­ence the land, and the light, when, dur­ing sum­mer, there is light all day and night. Things changed. The edi­tor (and I) decid­ed not to pub­lish the full text of the third book, but, reserve the Ice­land adven­ture and sub­se­quent events for a fourth vol­ume. At least that was my understanding.

The third book ends, there­fore, with Crispin on the high seas, head­ing for Iceland.

But if you look at the jack­et of Crispin: The End of Time, it reads, “The Final book in the New­bery Medal-win­ning Trilogy.”

Which is to say, no fourth, final book.

Since that time, some Cana­di­an film-mak­ers have tak­en an option on the series, the intent being to pro­duce a tele­vi­sion series based on the books. In dis­cus­sion with these folks, I out­lined the idea for that last book. Those ideas would be incor­po­rat­ed in the prospec­tive series. And, I sup­pose, I would write that fourth book.

I has­ten to say, film-mak­ing, at best, is a dicey project, and it’s impos­si­ble to pre­dict if that film will actu­al­ly be made.

If you look at the jack illus­tra­tion of Crispin, the End of Time, he is leap­ing. Just what he is leap­ing into is unknown. I know, but I haven’t told-not yet, anyway.