Story Behind the Story #29: The Barn 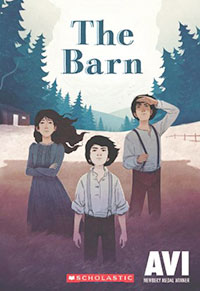 Many peo­ple, like myself, find old barns attrac­tive. It’s not just the weath­ered archi­tec­ture: I sense the traces of many hands, many beasts, crops, the work­ing lives, all of which grow old with grace and dignity.

One day I was in north­ern Cal­i­for­nia, look­ing at such an old barn. Actu­al­ly, I was doing more than look­ing at it; I was pho­tograph­ing it. Across the way was a house. A woman stepped out­side, and from her porch, called out, “Like that barn?”

“The farmer start­ed to build it, but he got sick. His kids came and fin­ished it for him.”

That’s all she said before retreat­ing into her house. But she left me with that sto­ry, which became The Barn.

There was more than that of course.

My father’s father, my grand­fa­ther, in his old age, came to live with us. I, as an old­er teenag­er, some­times had to take care of him, help him wash him­self, put him to bed. He was not always lucid. But one night after I had bathed him, helped him with his paja­mas, and put him to bed, he looked at me, and with a very clear eye, said, “When you are as old as me, you will know my shame.”

When I heard the sto­ry of the barn, my father had recent­ly announced he was quite ill. This was a man with whom I had nev­er been able to get along: Our lines of com­mu­ni­ca­tion were at best, full of static.

I also had recent­ly spent some time in Ore­gon, and as is my way, I read much about the Ore­gon Trail. What was most fas­ci­nat­ing were let­ters and diaries. What struck me was how these coura­geous peo­ple wrote so sim­ply about their extra­or­di­nary lives.

All of these ele­ments went into writ­ing The Barn. Read­ers’ reac­tions have been much divided.

Like many authors I am asked if I have a favorite of all my books. I don’t real­ly. But if pressed, I will say, “The Barn.”