Story Behind the Story #30: Poppy 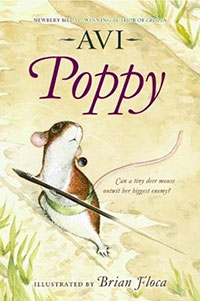 For about eight months I lived in Cor­val­lis, Ore­gon because my wife had a semester’s vis­it­ing pro­fes­sor­ship at Ore­gon State University.

The uni­ver­si­ty had a book­store and one day I was brows­ing among the remain­dered books. For some rea­son one book caught my atten­tion. It was writ­ten by a nat­u­ral­ist who worked in a for­est. One day he dis­cov­ered a bare­ly alive owlet on the for­est floor. He res­cued it, restored it to good health and taught it to become wild again. The book was full of infor­ma­tion about owls. I found it fascinating.

(Oh, how I wish I could find the title and author of that book! I had giv­en it away and I have nev­er been able to track it down.)

In any case, I decid­ed it would be fun to write a book about owls. If you know my book you will notice that it begins with Mr. Ocax, the owl. That’s because he was to be the pri­ma­ry sub­ject of the book. But—very typ­i­cal of the way I write—I got much more inter­est­ed in the mouse he was going to eat—a crea­ture I named Pip. Indeed, the book came to be called Pip.

Fast for­ward. I had fin­ished an almost final draft of the book. Back in Prov­i­dence, Rhode Island, I invit­ed myself to read the book to a 5th grade class at the Moses Brown School. I had done a cou­ple of ses­sions when a boy approached me with a book in hand. “Avi,” he said, “is this where you got the idea for your book?” He hand­ed me a small, Cana­di­an book that was titled: Pip: The Sto­ry of a Mouse.

Under­stand­ably, I felt a need to change the name of my char­ac­ter, and the book’s title. Hence, Pop­py. So, it was.

I am often asked about the char­ac­ter Ereth, how did he come about? The best I can answer is that he was built in oppo­si­tion to the char­ac­ter of Pop­py. She is gen­tle and kind. He is rough and grumpy. And so forth. As for the way he talks? It just came to me. Dear friends, take it from me: writ­ers don’t always know what they are doing. Some­time we just get lucky.

But—the book was orig­i­nal­ly pub­lished by Orchard Books. At the time, two things were hap­pen­ing at that pub­lish­ing house. It was in fact foundering—a sto­ry too com­pli­cat­ed to explain here—and at the same time it had changed its com­put­er-dri­ven sales pro­gram and its ware­house. Though the book had got­ten good reviews I was get­ting calls from book stores and libraries telling me that the book was impos­si­ble to get. It was being list­ed as “out of print.” It was, in short, rapid­ly disappearing.

In the prover­bial nick of time, the book won The Horn Book Award for fic­tion. Peo­ple some­times ask what is the impact of awards. I have absolute­ly no doubt that the award saved Pop­py. Sav­ing it meant all the oth­er Pop­py books would be writ­ten. But that—as we say—is anoth­er story.